When I was young, I wanted to be just like Bruce Lee. I’d study his films with the intrigue that only a child could have. I’d kick, punch, and follow his movements during movies and rewind the key moments of all his films. I didn’t grow up to be anything like Bruce Lee, but I still consider him to be the epitome of what a fighter should be. I’m not a huge fan of watching UFC, but I love fighting games and I’m a big fan of the Fight Night series. EA knew how to convince an outside like me to get involved, just provide a skin of a man who practically made the world recognize Martial Arts.

EA Sports UFC has a good assortment of modes that you’d expect from a simulation fighter or sports game in general. Okay, that’s not exactly true. This is the UFC after all, and they don’t really participate in tag-team battle-royale table matches. You get two guys fighting offline, or two guys fighting online. Players will be able to enter Championships online, or just go toe-to-toe in a quick match. While single-player will allow for some exhibition play, challenges, and a career mode. 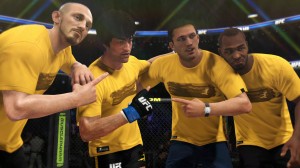 You can choose from 97 different fighters, and this time the women are included as well. If you’re a big fan of UFC, I am certain your favorites like Forrest Griffin, and Jon Jones are in there. I’m not going to kid around and say I gave a damn about any of them, I played this game strictly for the Bruce Lee factor. They have a few things going well for Bruce Lee, his likeness and his battle cry. My problem is that he not only costs money, but he’s only a 94 overall character. I originally thought that was just a balance thing, but Jon Jones is a 98 overall. So they are saying that Bruce Lee, the king of ass-kicking in real life and in movies isn’t worthy of a 99 overall? Blasphemy!

The worst parts about the Bruce Lee debacle in my opinion, is that when you use him in Career Mode… his speed is locked to 80. This is Bruce… Lee. One of the fastest men in the history of Martial Arts, how the hell does he only have an 80 punch speed and kick speed? It doesn’t stop there, he only has an 85 strength ration as well. We’re talking about a man that can give a sidekick to a heavy bag and send it flying off its hinges. No sir, I don’t like it, not one bit. Finally, they didn’t even attempt to give him any sort of signature moves dedicated to the man. Not a flying jump kick, a step-in sidekick, not even a take on the memorable one-inch punch. I am utterly appalled and unfulfilled by this misstep on their part.

Let’s continue on to Campaign Mode before I blow my top. Career Mode is a huge step back from most of the career modes in other fighters. What you get is something that you possibly would have seen in Fight Night Round 2, actually… it’s really identical to that formula. The change would be that it’s all about seeing a bunch of random UFC fighters popping up on screen to congratulate you, or so you can watch a montage of them talking about how cool knocking someone out is. In just under an hour or two of play, you’ll see their messages start to repeat, and the Playstation 4 redundantly telling you that it has stopped recording this footage.

Underneath all of the gloss, you click on fight and it selects an opponent for you, you do some pre-selected training routines, allocate attributes, beat up a dude and repeat. UFC doesn’t try to strive to tell some kind of story like in the NBA 2K series, it’s all a cut and dry formula that gets boring relatively quickly. It’s a little disheartening how barebones it is, it’s almost like they didn’t even try to add some interesting features to it.

So what about the gameplay? It’s fun, but it is incredibly similar to that last UFC game that EA put out. The big change is the gates system for submissions that allows you to spam the analog stick around to avoid being caught by your opponent so you can escape. In honesty, the ground game still needs some working on, but it’s not as easy to get choked out this time around. As a matter of fact, it’s not easy to stay on the ground for long at all. Which is a good thing, because the ground game is boring anyway. The stand-up game is actually fun, but the animations are really slow and lack oomph. I was usually unimpressed by a dude lightly taking a roundhouse kick to the face, or how every knockdown has like 5 canned animations. Even the fall to the floor is just the character falling on his back and throwing his arms out to the side. It’s not awful or anything, but the velocity and impact from damage, and the unexpected falls from the Fight Night games are definitely missed. 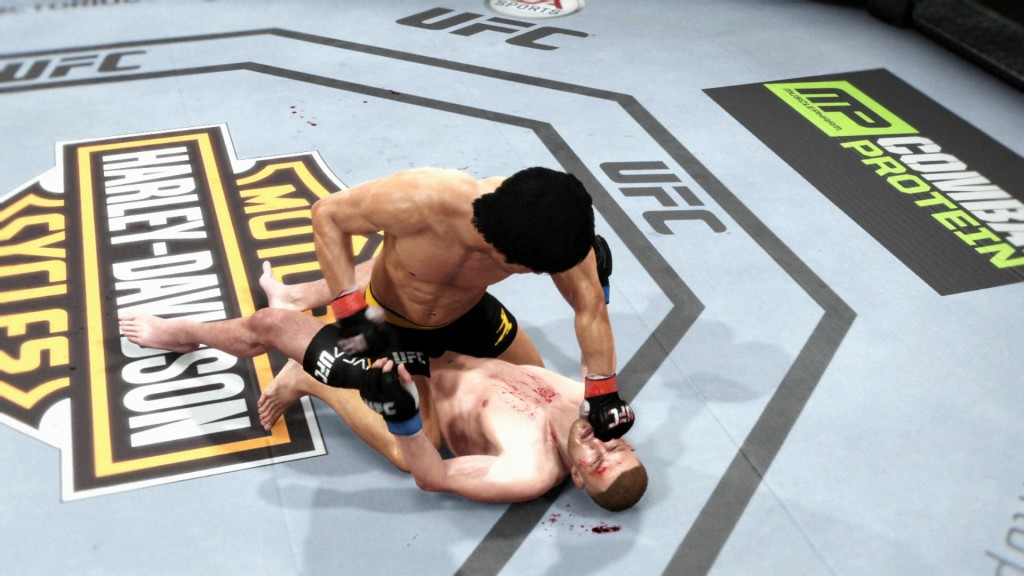 Visually the title looks really good, there are nice crowd animations and stadiums, and the character models look fairly nice. It’s just the in-ring combat that lacks the polish of realism, as every single character has a robotic stare and are completely devoid of emotion until the end of the round. There are lots of cuts and bruises that the characters can obtain, but the sustained damage doesn’t really matter much when standing up.

I kicked the living crap out of some dudes leg and he started to limp, only for his bar to go back up and he was walking like a man again. Of course this would probably lead to a quick submission, but what about breaking ribs and legs during the stand-up game? It’s the lack of impact from all aspects of a fight that take me out of this sports “Simulation”. Finally, the announcers are absolutely terrible. They only call out damaging hits as a hook, or an uppercut during replays. The audio is oddly disconnected from what’s going on in the fight until it’s time for a knockout. At least other games hide the lack of connection under pre-recorded audio about sports player’s lives.

UFC is an average kind of fun, it has a great stand-up game, but the ground game is lacking. The dearth of modes or interesting story mode is a major drawback, it quickly became boring to live this uneventful life of a UFC fighter. EA has some neat ideas in the form of seeing other players knock each other out in highlight reels, but who wants to see the same knockdown animation 300 more times? EA Sports UFC receives a Wait for a Sale from Geek Citadel. I’d grab this game at about around $25 or less. It contains a lot of flash, but very little substance.