Persona 5 knows I want to play the living hell out of it. I want to play it until my fingerprints are engrained in the thumbsticks. Every couple of weeks Atlus throws out a tease of the gameplay and the English dub that makes me salivate.

This trailer is no different, this time showing off lots of dungeon footage. Dungeons in this game are called “Palaces,” and they’re a bit different than previous persona games. It looks as if platforming, stealth, and even puzzles will play a bigger role in gameplay.

We’re also shown the Shin Megami Tensei conversation system is back in full effect. Looks like you can talk to Persona to convince them to flee, join, or give items to the crew. I’m stoked and can’t wait to get my hands on this. 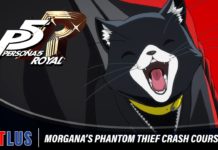