Right at the intro of the game we’re introduced to a vibrant city bustling with traffic and exploding with colors. The visuals are best described as a retro-cyberpunk future. The crisp 2D visuals meld into the wonderous futuristic landscape. It’s aided by bloomed neon lighting and a plethora of distinctly designed denizens wandering around the city.

The detail paid to this world is exceptional with distinct locales filled with gorgeous background visuals and impressive animations. There are quite a few references to pop-culture spread around that’s easy to spot and appreciate. Tales of the Neon Sea nails its world with a flair that very few games are able to pull off.

The sound design is well done but nothing in the music selection truly stood out. If you’re expecting a plethora of synthwave or even Jazz infused beats, you might be a bit let down with Tales of the Neon Sea’s choices. It tries to be more like Blade Runner but without ever having the epic rise and fall of the tracks from those movies.

The ambiance, on the other hand, is great, there are some neat little sound effects like bustling crowds, sirens, and the slow whirr of hover vehicles landing.  There isn’t any voice-over to speak of though, so get ready to read lots of text. 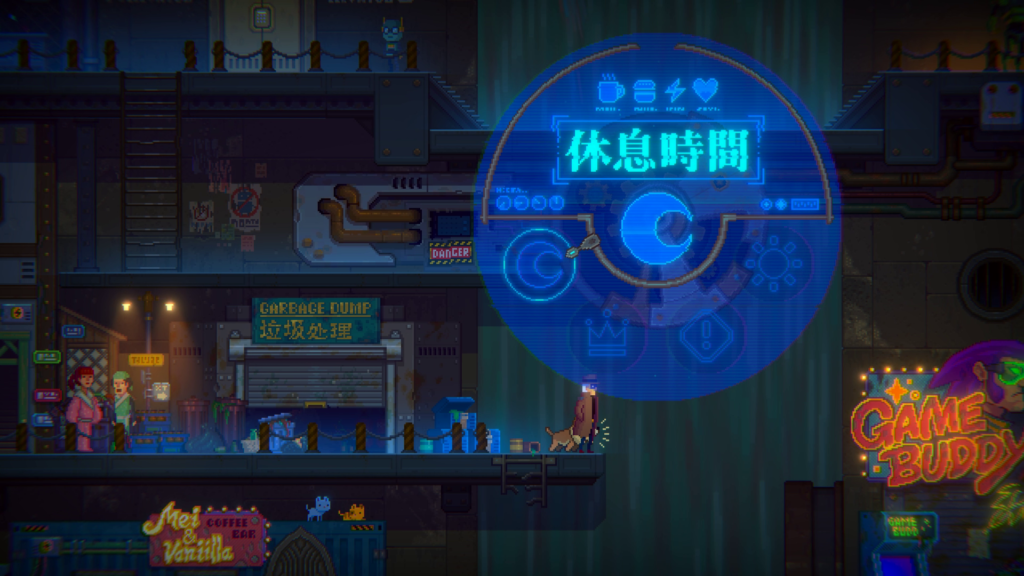 The story comes second to the visuals in world-building.  It starts with a brutal introduction for our protagonist. Rex finds himself injured at the bottom of the sewer before the record scratches and the classic “I bet you’re wondering how I got here” trope begins to play out. From here we find out that Rex blunders into a series of cases that exposes a larger plot involving very powerful people in the city. With the help of a stray cat named “William.” He heads spirals down a rabbit hole that slowly unravels a case from his past.

The story is great and deviates from the more straightforward Cyberpunk stories. It includes some radical ideas involving A.I. respectability politics and talking cats that run a crime family. While the game involves some serious themes such as brutal murders, it also tries to keep things light-hearted with silly little jokes and references from movies. It’s a good time but…

…there is a barrier holding us back from progressing through the story in a timely fashion. Tales of the Neon Sea is not your typical adventure game with point-and-click mechanics. We’re given full control of Rex in a 2D space and allowed to walk about in a fairly large world. You can pick up items, discover clues, and talk to citizens, and even play as a cat. There is a full-on investigation mode in the game where Rex can scan for different substances, fingerprints, and other types of evidence.

There are also a buttload of mini-games from fixing a hangover using chemistry to picking a lock via a laser light puzzle. The game also features simple in-game adventure puzzles like combining items and using them to solve an issue in the world. All this is great until the game decides to mostly ignore the adventure game aspects and riddle the player with repetitive puzzles. 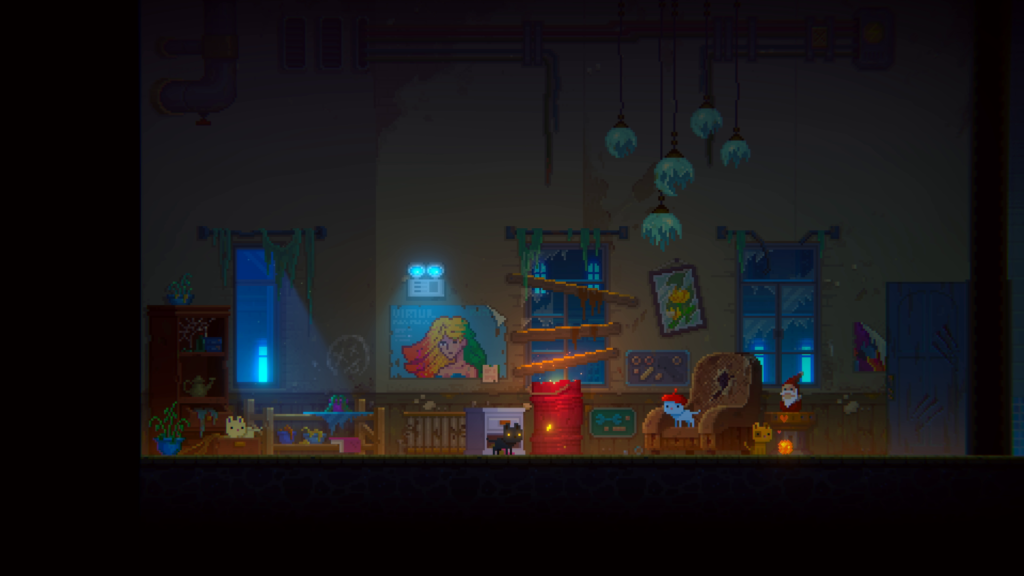 At first, we’re given a series of puzzles that never seem the same. After I reached Chapter 2, the game wouldn’t stop throwing out the annoying revolving puzzles in different formats. It felt like I’d hit a wall of these every 5 to 6 minutes just to slow down the story progression. I’m all for doing puzzles but sometimes these things can take upwards to 15 minutes to solve and then Rex walks about 20 steps and he’s thrust into another one.

It slowed the game to a crawl and only added frustration to an otherwise interesting world. After a while, it was like I was doing puzzles for the sake of doing them. No thanks!

Tales of the Neon Sea is an exceptionally beautiful game with an intriguing storyline. It’s sad that it felt the need to saturate itself in redundant puzzles that constantly slows down the pacing of the game. This is one instance where a more streamlined focus on classic adventure game mechanics would have come in handy. The padding of puzzles is alarming and frustrating and will more than likely stop many people from pushing onward to the end.