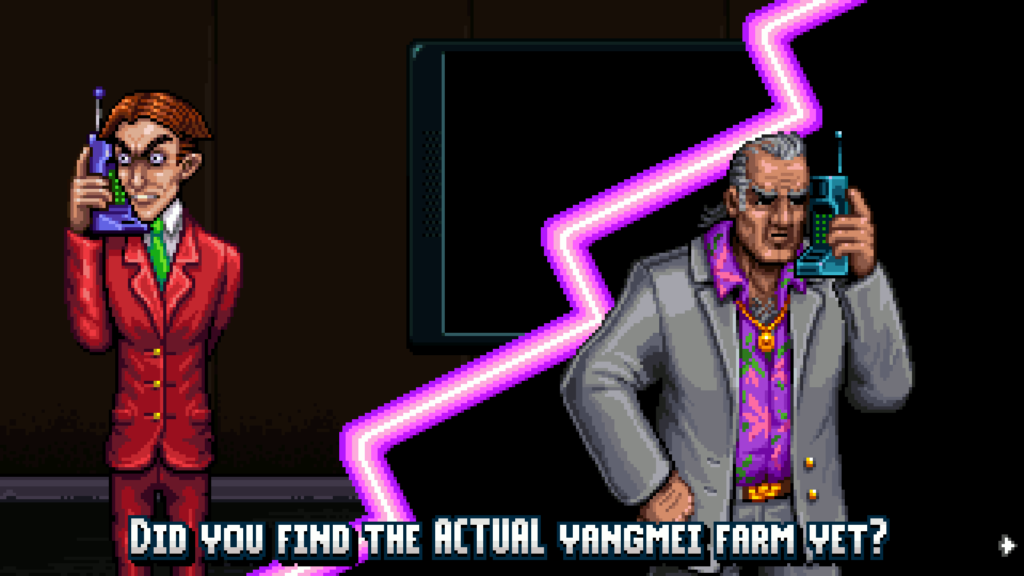 Shakedown: Hawaii visually dances between the 16-bit and 32-bit era of gaming sprites. It sports a top-down view that’s very similar to Grand Theft Auto version of a River City Ransom title. There is a vast amount of detail in the environments, cars, and the slew of characters that scramble across the screen. The amount of care placed into the individual animations for the civilians is a joy. They’ll dance while listening to music, take photographs of the scenery, or chow down on a meal.

The dialogue menus and mini-cutscenes are also fantastic. The characters that show up in dialogue don’t move around much but you can glean their personalities from the subtle ticks of animation. There are also quite a few cool action animations that add flair to a situation. Sometimes, you’ll see fruit being thrust into view or we’re shown a visual of our vegging out in front of the TV. The amount of care that went into different presentations is greatly appreciated.

You might be asking why that’s so important? It’s because this game is all about how businesses use underhanded tactics to increase revenue. We play as the C.E.O. of a company that’s on the verge of bankruptcy due to out-of-touch practices. His job is to head out into the city and use whatever devious means are necessary to take control of the city and fund his corporation. Usually, that means he’d go outside and soak himself in the blood of his enemies. I mean… he does that too, but there are a variety of other methods he must also pursue.

Shakedown: Hawaii is a most satirical take on the business practices as they are now. It touches on a fair number of things that we as civilians have been creeping into our wallets without much pushback. It tackles convenience fees, the price hike of superfoods, and even one of the craziest fads “Raw water.” Shakedown: Hawaii’s best feature here is that it pulls no punches with making the player feel like a trashcan person. The C.E.O. comes up with a new scheme every day and we have to act on it. Sometimes it’s good to be the villain in some games, but Shakedown: Hawaii does it best to make you feel icky for doing so.

The story is straightforward but also bounces around a bit between two other characters. We can play as the son of the C.E.O. who is intent to do whatever his father wishes as long as he doesn’t get kicked out of the house. The other character is an assassin who hits on an unknown island so that the company has the best produce. Neither one of these characters is all that interesting or fleshed out but they do allow a break from all the property snatching gameplay. 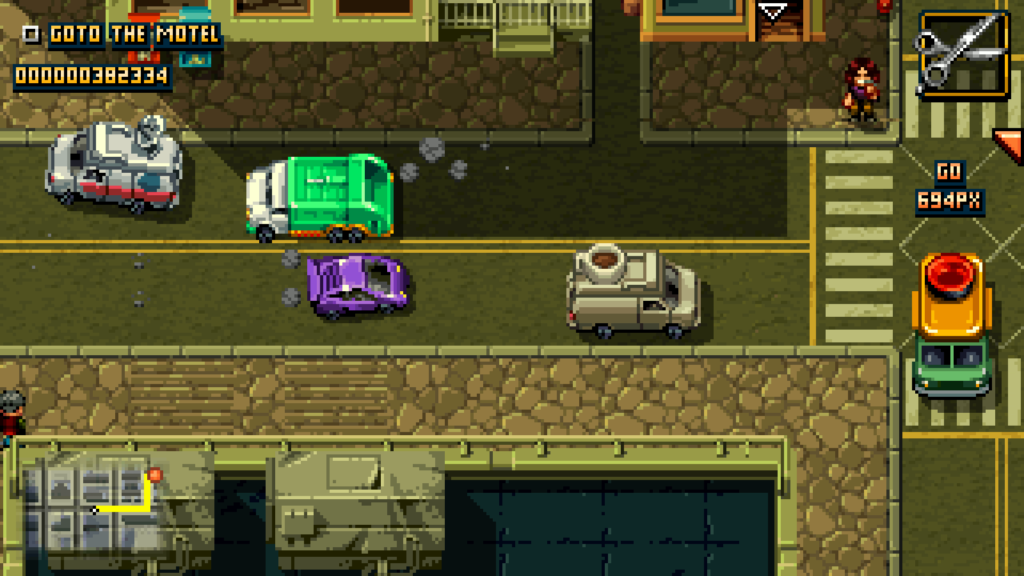 Speaking of snatching things… Shakedown: Hawaii is all about taking as much money as possible. The characters can shakedown businesses by busting up the store, spreading rumors during a protest, and a few other techniques. Despite the name, shaking down isn’t one of the biggest parts of the game. In fact, it’s barely apart of the game and not really as rewarding as simply purchasing properties. Which we’ll talk about in a minute, but I also want to talk about some of the other activities first.

Our villainous characters can repo cars that were purchased via a sub-prime loan, burglarize homes and take peoples items to sell at a pawn shop, and a couple of other activities requiring nefarious deeds. The point is… none of those pay as well as simply continuing through the campaign and making good investments on properties. It may be fun to bust up a mailbox for some extra spending a couple of times after the start of the game, but by the 3rd hour I was rolling in so much money that I didn’t see the point of doing anything else.

Purchasing properties is as simple as having cash, scrolling over the map, and clicking the accept button. As we progress through the game and unlock more properties, we’re given multipliers that boost the amount the properties churn out. A couple of right moves with the multipliers with the right properties will have the player rolling in dough in no time. This crushes all of the other activities because they provide no longevity in comparison.

I think it’s the lack of nuance to the multipliers that make it a bit one-dimensional near the middle of the game. Incentives like “Convenience fee” or “Sell Unrefined Products” show up for every property in the game. If you stack all of the multipliers on five high grossing properties, you’ll more than likely end up ignoring everything but the missions.

The characters also get a salary that allows them to venture around the city to buy weapons, hairstyles, and clothing. I personally, didn’t find a need to do any of this. Clothing doesn’t change much outside of color schemes and there are only a few hairstyles, hats, and beards. It’s a nice addition but it’s not something I was adamant about changing. I made a Joseph Joestar look alike and never looked back!

The gunplay is often smooth when using a controller with the right-stick. The auto-aim while with the action button is hit or miss… but more miss than anything else. It’s strange that it works so well when shooting from a vehicle while being so confused when running through the streets. The vehicles, on the other hand, are great to move in the top-down space. They aren’t vastly different from each other outside of different speeds, acceleration, and nitrous additions. However, they are death machines that take insane amounts of punishment and crash through walls, trees, and people with reckless abandon. 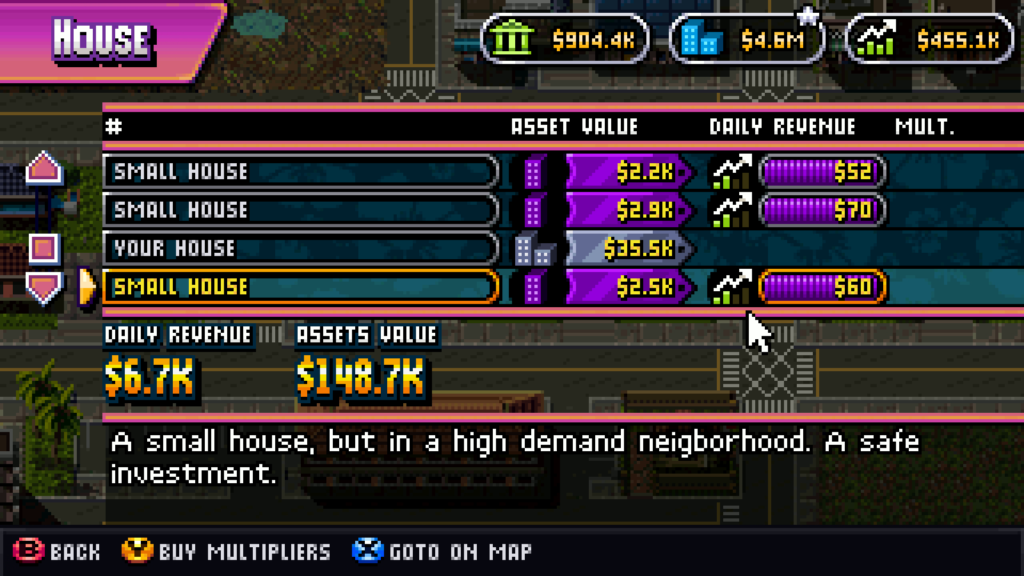 Now one thing I have to do is give respect to the number of mini-games that were created for Shakedown: Hawaii. There are a few small games that spoof classic titles and even some recent ones. Just, for example, there is a game that lets us set up rebates by playing Tetris. Another one makes use of the music genre of games by having our character workout at the gym. I loved these little tidbits because they were funny, informative, and gave us a break from the shooting things.

There is some cool music in the game that doesn’t sound incredibly generic like most retro throwbacks. I just can’t say that any of it created an earworm or was even particularly catchy. It does the job it’s supposed to do but sometimes it just feels out of place. This game clearly takes place sometime around 2018 but almost all the music has an 80’s movie vibe. It just seems out of place but it does help that most of the music is forgettable. Sounds of everything else is pretty great, there are some interesting screams from the characters. And the weapons and automobiles sound as appropriate as they can in a world of 2D sprites.

Shakedown: Hawaii has a few scattered ideas but I still think it’s a great game. The willingness to tackle the underbelly of the corporate world with such levity is as hilarious as it is enlightening. The gameplay is fun, fast, and frantic even if the side-activities lack substance. What it does excel at is creating a frantic landscape that mixes the action man about town formula with inventive ideas like invading someone’s personal space to complete a mission. I wanted it to continue well after I had collected most of the properties when the game was still giving me tutorial missions. It’s a fun world but the story brutal story of a C.E.O. taking advantage of a city and its populace was the real treat.